This is my personal cheatsheet and tutorial for statistics. It is far from being a complete introduction, the main goal is to have a centralized resource where one can quickly remember or access more detailed resources. Many paragraphs are excerpts from the linked Wikipedia articles in the associated section. \(\def\mean#1{\bar #1} \DeclareMathOperator{\EV}{\mathbb{E}} \DeclareMathOperator{\Prob}{\mathbb{P}}\)

Something hard to measure, that you’ll have to define how to measure.

It’s how you will measure a given construct.

A sample is a (sub)set of elements from a population of interest.

When it is not feasible to directly measure the value of a population parameter (e.g., unmanageable population size), we can infer its likely value using a sample (a subset of manageable size).

Note: make sure to distinguish between the terms sample size and number of samples. Use the former to describe the number of elements in a sample, and the latter to refer to the number of different samples (each constituted of many elements), if that is the case.

Relationships can be shown by observational studies (eg. by seeing a point distribution). Causation, however, has to be found through controlled experiments.

The value at which frequency is highest.

The mode doesn’t really represent the data well because:

The value in the middle of the distribution.

(If there are an even number of elements, the median will be the average of the two in the middle.)

The median is more robust to outliers than the mean. It is therefore the best measure of central tendency when dealing with highly skewed distributions.

The weighted average, or expected value. 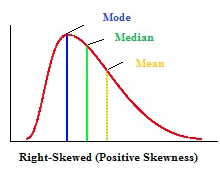 The mean is always pulled towards the longest tail of the distribution, in relation to the median.

IQR is the distance between the 25% and the 75% higher measure of the data.

Problem with Range and IQR: neither takes all data into account. 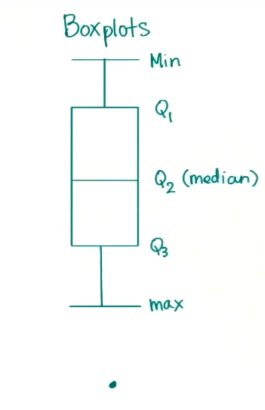 Outliers are represented as dots in a boxplot.

(from a machine learning point of view)

Point estimation is the attempt to provide the single “best” prediction of some quantity of interest. A point estimator or statistic is any function of the data:

Bias measures the expected deviation from the true value of the function or parameter. The bias of an estimator is defined as:

where the expectation is over the data (seen as samples from a random variable).

Variance provides a measure of the deviation from the expected estimator value that any particular sampling of the data is likely to cause.

We call deviation a measure of difference between the observed value of a variable and some other value, often that variable’s mean. We calculate the variance by taking the mean of squared deviations:

The Z-Score (aka standard score) maps a sample $x_i$ to how many standard deviations $\sigma$ it is from the mean $\mu$:

By its definition, the z-score is a dimensionless quantity. It can mapped directly to a percentile when you know the shape of the distribution (or, in case you do not, to weaker bounds using Chebyshev’s inequality).

The Bias vs Variance Tradeoff

How to choose between two estimators: one with more bias and another with more variance? The most common way to negotiate this trade-off is to use cross-validation. Alternatively, we can also compare the mean squared error (MSE) of the estimates:

The relationship between bias and variance is tightly linked to the machine learning concepts of capacity, underfitting and overfitting.

The sampling distribution is the probability distribution of the values a statistic (e.g., sample mean or sample variance) can take on.

Depiction of distribution sampling, taken from [2].

The SEM quantifies the precision of the mean, i.e., it measures how far the sample mean is likely to be from the true population mean. In other words, the SEM is the standard deviation of the distribution that defines the values of the sample mean we will observe, for each sample of size $n$ we take from the population.

Since $\sigma$ is seldom known (to calculate it we’d have to make lots of experiments, finding many different values for the mean, and calculating its standard deviation), the SEM is usually estimated by using the sample standard deviation:

The proof of the relationship between the SEM, the standard deviation of the population $\sigma$, and the sample size $n$ is shown below (reference). The first step is allowed because the $X_i$ are independently sampled, so the variance of the sum is just the sum of the variances.

We can use the SEM to interpret different populations and see if there is evidence that there are differences or similarities between them:

How the standard error of the mean helps us interpret populations, from this YouTube video.

We can also use the relationship between the SEM and the sample size $n$ to define how many elements we need in our sample to achieve a desired level of statistical significance.

Margin of error and confidence interval

A line of inferential reasoning one could use to define a confidence interval is:

Which gives us the general formula:

The null hypothesis $H_0$ is a default position that there is no relationship between two measured phenomena or no association among groups. It is usually contrasted with an alternative hypothesis $H_1$, a new theory.

Statistical hypotheses are usually formulated in terms of a test statistic, a one-value numerical summary of a dataset, defined in a way that distinctions between the two hypotheses can be made. The test statistic must be such that its sampling distribution and, consequently, p-values can be calculated.

Notice that the boundaries between $H_0$ and $H_1$ are defined in terms of statistical significance, not in the strict mathematical sense. For instance, if we found out that the (true) test parameter of the experimental group would be slightly but not significantly different than that of the control group, we would still consider $H_0$ as the correct hypothesis.

Two-tailed (non-directional) tests are more general (more conservative); one-tailed (directional) tests are used when we expect a direction of the treatment effect (e.g., we want to compare a new webpage interface with an established one and we care only about assessing if the change will improve what is currently deployed).

p-value refers to the probability of obtaining test results equals to or more extreme than the actual observations, under the assumptions that the null hypothesis $H_0$ is correct.

The smaller the p-value, the less likely $H_0$ holds, and the higher the statistical significance is said to be.

In simple words, statistical significance is a determination by an analyst that the results in the data are not explainable by chance alone [3].

More precisely, given a significance level $\alpha$ (chosen before the study) and the p-value $p$ of a result, the result is statistically significant when $p < \alpha$.

Values for $\alpha$ are usually set to 5% or lower, depending on the field of the study and what probability is considered “unlikely” to occur.

The central limit theorem states that, when i.i.d. random variables are summed, the resulting distribution tends toward a normal distribution, as the sample size grow, even if the original variables themselves are not normally distributed.

Continuity correction are used when approximating a discrete random variable with a continuous one [ref]. 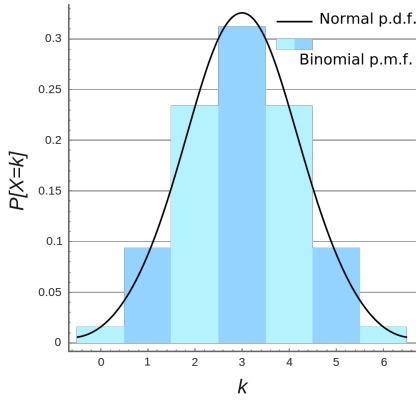 Type I and Type II errors